A bit about Mrs. Rimlinger 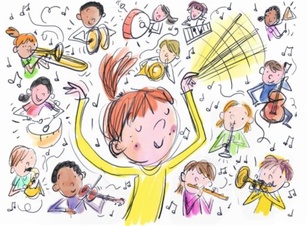 Mrs. Rimlinger knew she wanted to be a musician from the time she was very young.  She began piano lessons when she was in first grade, and then in 4th grade she joined her elementary school Band playing clarinet.  She loved school, but her favorite subject was always Band.  By the time she was in high school she was performing in her school's marching band, concert band, orchestra, jazz band, choir and madrigals!

Mrs. Rimlinger went to college to fulfill her childhood dream of becoming a clarinet performer.  Her clarinet teachers were Charles Russo and Charles Neidich at Hartt School of Music, Manhattan School of Music, Columbia University, and SUNY/Stony Brook.  During college Mrs. Rimlinger practiced her clarinet an average of 4 hours a day!  The rewards for all that hard work were amazing!  After college she got to perform all over the United States with some amazing and talented people.  Along the way, she continued to learn how to play more and more instruments, enjoying each one.  Lucky for her she did that, because now she gets to use that knowledge to help students at BPES become little musicians, too!  This year is Mrs. Rimlinger's 8th year teaching at Bushy Park and her 21st year teaching in Howard County.  She still performs often as well.  For example, if you've ever been to see a show at Toby's Dinner Theatre, you may have heard Mrs. Rimlinger playing clarinet, flute and saxophone in the orchestra.

Mrs. Rimlinger is married to a very smart mathematician and computer geek, and they have two wonderful children:  Thomas is an astrophysicist.  He plays violin and lives in Virginia.  He's getting married this winter!  When he asked his fiance to marry him, he played a song on his violin to help create the perfect atmosphere for the special moment!  Anna is a teacher and an activist for the rights of all people, but especially children.  She plays French horn and piano, and lives in Chicago.

When Mrs. Rimlinger is not performing, teaching, composing, editing, practicing, arranging or studying music, she is probably either reading, doing a crossword puzzle, shopping, bragging about her children, or hiking.  During the summer of 2017 she hiked about 300 miles on the Appalachian Trail in Vermont and New Hampshire.  She also traveled to Tennessee to see the total eclipse!  Did you see it?